Home » When Nerds Buy Cars and A Tale of Two Dealerships

You might recall from my January goal updates that my car buying went back from on-hold to a certainty.  With that, I went full-scale into car buying mode, my way of course.  I narrowed my criteria to Nissan Rogues, 2015 or newer, Nissan Certified, under 40,000 miles, SV or SL with premium package, and in red or blue, though at first I was heavily leaning towards blue.

I went back to browsing car shopping sites, Cars.com, Carfax, AutoList, Edmund’s, KBB, CarGurus, Autotrader, TrueCar, and of course Nissan’s CPO site.  At first I was still just doing bookmarks in Chrome, but eventually I found that too unwieldy, especially when I wanted to massage the data to see varying trends and narrow choices.  So I made a spreadsheet in Google Sheets, with the pertinent details on each vehicle that seemed like a potential.  I later added a scoring system, to give me a somewhat neutral way of seeing which ones were the closest to my idea.

With my search range expanded out to 500 miles, I eventually had some 57 vehicles on that list!  Talk about analysis paralysis!  I used my scoring system to dump all the lowest ones, then after doing various sorts and seeing how many choices I had, I dumped almost anyone that wasn’t a near perfect match for my ideal Rogue.  You can see the final version of the sheet here, if you’re curious 🙂  I also went back out to Douglass Nissan on a Sunday so I could just walk the lot and see the red and blue versions in person, versus going by the web pics.  The 2017 Rogues had different shades of both, so I made sure to look at both 2015/16 ones and the 2017s.  I’m very glad I did, as it helped me rank my color preferences to move the older Cayenne Red up and the older Arctic Blue down.

With my list down to 21 one options, the loan secured and funded, I decided it was time to get out and look at some of the options.  There were some good options around the state, but two of my highest ranking ones were right there in Houston, so I took a Thursday off to make the drive there, aiming to get the heck out of Houston before it got anywhere near 5 because traffic hell.  I’d already contacted the two dealerships, plus a third, to let them know I’d be that way and the order I was going.

My first stop was Baker Nissan, where the only 2017 to make the cut (due to its mostly higher prices) resided.  The price was still a little above my budget, but I knew it was overpriced for the mileage and I figured it was worth looking at anyway, particularly as it was the lovely Caspian Blue I liked.  Despite having an appointment with one sales person, she was actually on vacation and I was handed off to someone she’d asked to look after me.  He was certainly not my deal car salesman and the whole thing ended up being a rather negative experience.

For the short version, while I quite enjoyed the test drive, I found the salesman to be dismissive, condescending, and down right insulting of my intelligence.  When discussing the price, he waved off the multiple sites I noted I used for my numbers (KBB, Edmunds, CarFax, etc) as being inaccurate because none of them actually sell cars and they just make those up.  He also proceeded to outright lie to me, trying to claim one of the comp vehicles I was using to justify my offers as not having the same features and even tried to claim a standard Rogue SV on their lot was the “same” as the Rogue SL with premium package that my comp vehicle was.  (for those who don’t know, the Rogue trims are S, SV, and SL with SL being top of the line).  In trying to convince me to go $6,000 over my budget, he threw out arguments about how much “prettier” the grill and wheels were and how women liked the look better.  And that 2017 meant it was better because it was newer. Yeah…no.   Anyway, you can read my full review on Yelp if you want the long version. 🙂

Suffice to say, I walked away feeling discouraged and dreading the rest of my car buying experience. I was tempted to just go home and skip the other two, but since I was already there and with encouragement from my buds via messages and emails, I headed down the road to Mossy Nissan to look at their Cayenne Red 2015 Rogue SL.  I already knew going in that this car had all the core stuff I wanted: SL trim, premium package with panoramic sunroof, and it seemed to have all the safety features I wanted.  Part of me did wonder about the lies of the previous salesman, though, and if maybe it was missing stuff.

Fortunately for me, my salesman there was an absolute pleasure to chat with!  He was respectful of my time, research, and my focus on the safety features of the car, not how pretty it was.  I never felt like he was trying to mislead me or “trick” me because I was a woman shopping alone.  Even while haggling, we regularly laughed and joked between arguing numbers (and even that wasn’t really arguing, more just discussing and actually negotiating).  He didn’t just dismiss my arguments for the offers I came back with and even conceded to a few being good points.  (again, fully review available on Yelp; and if you go there, ask for Floyd and tell him I sent you! :-))

In the end, it was a great experience and I was more than happy to walk away as the proud new owner of that Rogue. Total out the door price ended up being $22,000, which was over my $20,000 budget, but still a great price for the car. Fortunately, I was able to sell my 2003 Malibu the very next day, which helped fill up the rather gaping hole that extra amount left in my bank account.  😳

With that said, allow me to introduce my new baby, Ruby Moon! Looking forward to our next 15 years together or more 🙂 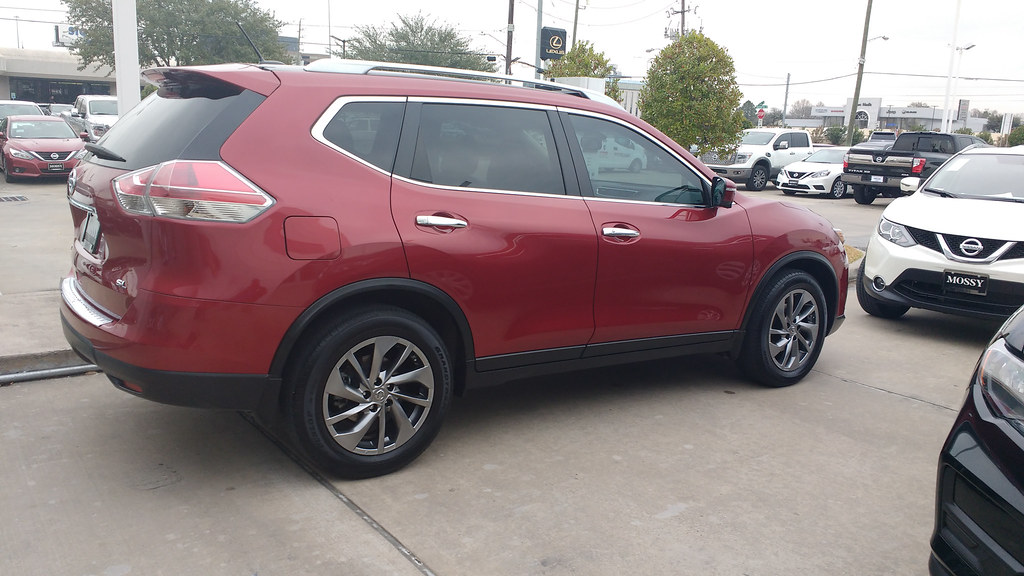 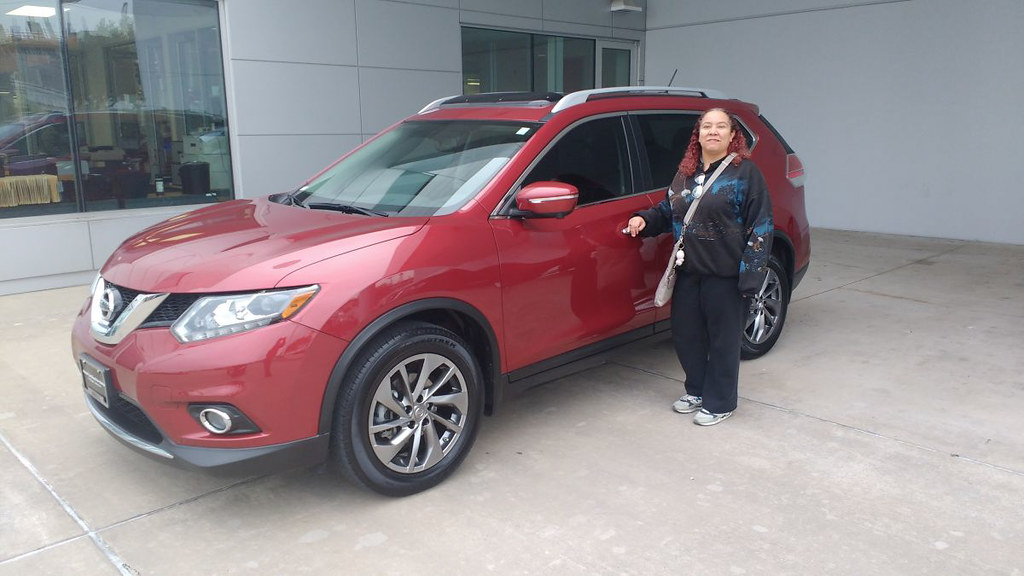 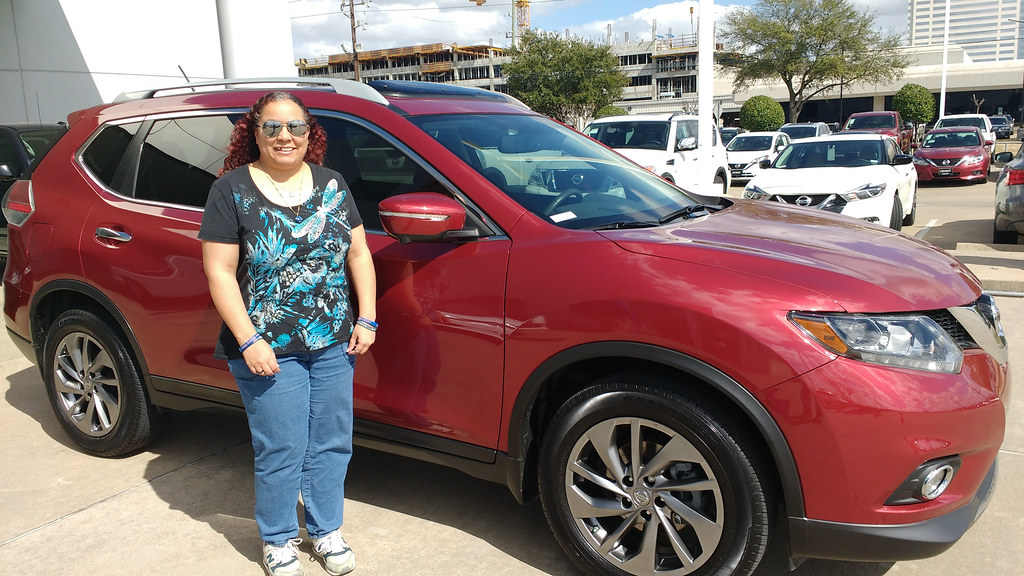