Stripes is a convenience store gas station chain that has practically flooded the Bryan-College Station area of late, especially after buying out both Chicks last year and Rattlers earlier this year.  We now have SIX Stripes locations, not counting the Rattlers locations which are currently still labeled as Rattlers!

Stripes does not sell ICEE (except again, at the still being converted Rattlers), however their Slush Monkey is pretty much the same as an ICEE, to the point that I suspect they entered a licensing agreement much like 7-Eleven has, with using ICEE machines, a mix of ICEE and their own syrups, and a trademarked brand that they can’t license to others to use.  As such, I decided to include them in the guide.

In addition to Slush Monkey, Stripes is known for its Laredo Taco taco chain and fountain drinks with a range of offerings and flavor shot options.  So far, at least, I’ve also noticed when they buy out existing stores, they seem to favor balancing out adding their own branded items and keeping the uniqueness of that location.  The old Chicks, for example, still has the Chicks burger grill (OMG, they are so good!), though with a reduced selection, and kept the country store kitz area.

Note: While there are quite a few Stripes in Bryan-College Station, I’ve only listed ones I have either confirmed have Slush Monkey or have not been able to check yet; I also exclude the old Rattlers, as they are listed here.

Stripes’ Slush Monkey comes in the three typical sizes and all at low prices.  However, the number of ounces in the small and medium sizes vary between stores as do the prices for each size.  So I’ve included the ranges I’ve seen in the table.

Different Stripes locations have different flavors and options available.  While the company’s website seems to indicate that all locations will, at minimum, have Coke and Wild Cherry, experience has not proven this to be the case though it is fairly reliable.

All of the stores use two-flavor, push-handle machines, with most stores having at least two machines and some having more.  The biggest Stripes location, the converted Chicks on N Earl Rudder Fwy (#2463), has three machines, providing for six flavor options.  See the pics below for the flavors locations had during my visits.

I would probably put Slush Monkey closer to ICEE versus 7-11’s Slurpee in terms of having the expected ICEE texture and consistency.  In that regards, the quality at most Stripes is fairly consistent, and I have yet to go to one to the machines out of service.  I do find they tend to do a pour that is more airy than I like, and they melt relatively fast, but they taste fine and the taste is spot on versus ICEE (the other reason I’m pretty sure they are just rebranded ICEE).

They use their own cups, with paper for the smaller sizes and then plastic for the large.  While their drink straws are similar to the red ICEE ones for width and length, they lack the little scoop at the end that’s helpful for getting the last bits if you’re a fast consumer. 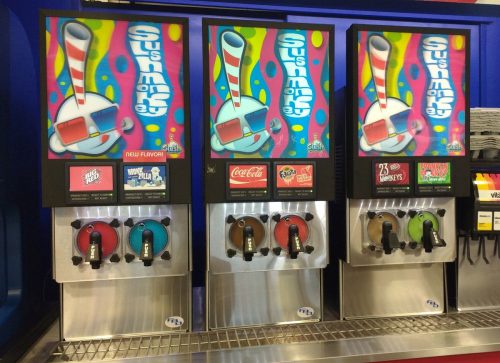 Slush Monkey Machine at Stripes #2463 at Boonville and Texas 6 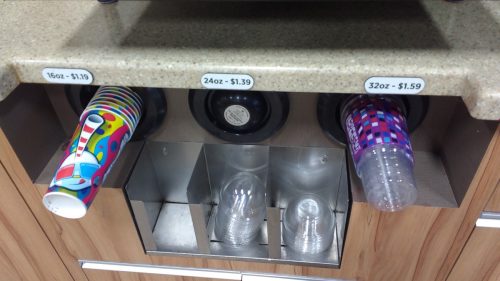 Slush Monkey cup sizes and prices at Stripes 2468 on Wellborn 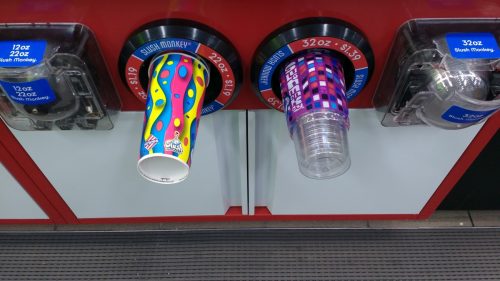 Stripes 2463 at Boonville – Some of the Cup Sizes and Prices